Real dial or is it a post-war remake for collectors?
I have not found such a dial any available books or on the Internet.

>>>ADMINISTRATIVE NOTE: IMAGES UPDATED BELOW IN APRIL 2018
.
Edward L. Parsons, Jr.
This topic has been discussed MANY times before. Here is a link to a prior discussion topic with more details:

Briefly, the 4992B's were originally made with black 24-hour dials and white hands. This watch is a postwar 12-hour conversion with refinished hands and dial.

Werner Rosier
I´ve seen "U.S. Gov't" engraved on the movements, but I´ve never seen it engraved with U.S. Army Air Corps, and that AIRCORPS without a space!

Aleksandr Dyakov
Movement - 4992B.
"AIR CORPS." - with "space".
Edward Kitner
Aleksandr,
From the little I know of these watches Hamilton was supposed to have made some for the military with the 12 hr dial. I have a link to one identical to yours but cannot copy it to the forms. Send me an email and I will send you the link.
Ed
Aleksandr Dyakov
Edward, I sent e-mail for you.
Edward L. Parsons, Jr.
Edward,

The 12-hour 4992B's you encounter today are all aftermarket conversions of one kind or another, that's why you can't find them in the watch books.

Go to Evolution Of 4992B and 3992B Markings, Numbers and Database By Scott Whittey

IT WILL TELL YOU WHAT YOU WANT TO KNOW
Edward Kitner
I cannot get the pics I have of an identical watch posted.
Jim Hester
It's a fake dial. The U.S. Army Air Force was created on June 20, 1941 with the U.S. Army Air Corps as a subordinant unit, then the residual Army Air Corps was abolished as an organizational unit on March 9, 1942. The serial number on the back of your watch is 1943.
Aleksandr Dyakov
Writing numbers on this dial for this watch is very similar to the dial for watch 3992B.
Michael Payant
Welcome to IHC Alex. Good people, good information. Regards, Mike
Aleksandr Dyakov
Great thanks, Michael!

Hub Harms
Hi Jim
The watch movement has same marking as dial.I can not make out ser.no.If you bring up Topic Evolution Of 4992B I think the movement & dial are correct.The case could be any thing that was aviable.Jim H.has same watch with pic.I would like to have.I could be a holy graile,If ser.fall in right spot.
Edward Kitner
Hubert,
That is the pic I tried to copy and post!
Aleksandr Dyakov
Pictures updated. 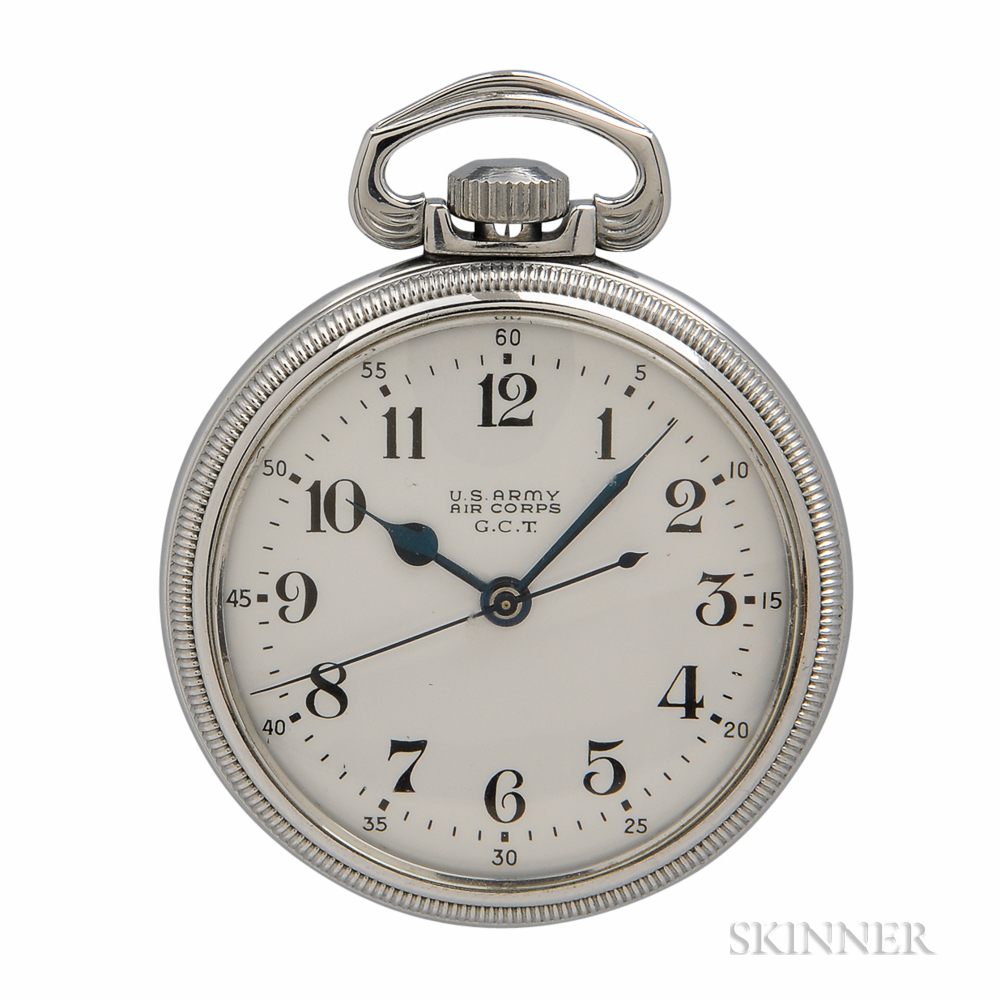 Jim Hester
It is in remarkably excellent condition. The lack of a serial number or an order number indicates that it was never sold to the military or used by them. Perhaps it is one that was assembled from unused parts sometime after the war ended?
Aleksandr Dyakov

quote:
It is in remarkably excellent condition. The lack of a serial number or an order number indicates that it was never sold to the military or used by them. Perhaps it is one that was assembled from unused parts sometime after the war ended?

Sorry, but I have no information about this watch. This pictures from Skinner auction.
Jim Hester
Sometimes one can find "New Old Stock" parts of watches and assemble them into a working watch. I do not know if that is what this may be in part or in whole, but it is another possibility given the lack of the serial and order numbers
Scott A. Whittey
Aloha my O'hana
This particular watch is curious in the fact that we do not see ADJ TEMP. AND 6 POS. UNDER THE CENTER SECONDS BRIDGE as we do on other early examples of the 4992B's
Additionally I would expect to see U.S. NAVY BU. SHIPS,with a BROAD ARROW and or U.S.GOVT. in BLOCK FONT on a 3992B
I will therefor say that it is as Jim postulated To be "assembled from unused parts sometime after the war ended?"
Just my 2 cents
Mahalo
Scott
Brian C.
When I worked at Waltham Precision Instrument Co. there were a lot of people left over from the watch factory. On their breaks and at lunch time, they were always playing around, and putting watches together. They had boxes full of old Waltham Watch parts.