Does anyone have any recent images?

Best regards, esp to our troops, Greg Crockett
A U.S.A.A.F. pilot, a member of the "Tuskegee Airmen," with what appears to be a private purchase sweep-second wristwatch. The watch looks alittle larger than the A-11, but it's hard to tell in a photograph. rgds
Grant Perry
Great project Greg,
Here is a couple that I found when researching (on-line) my Mappin Campaign. These photos were provided by Konrad Knirim Greg Crockett
Thanks Grant. Those are some great images. These and others are to be found in Konrad's book: MILITARUHREN 150 YEARS OF WATCHES AND CLOCKS OF GERMAN FORCES.

This image is an Imperial Russian officer of about 1916: Greg Crockett
Sorry for the quality of the above image! Here is a closer look at the wrist pocket watch holder being used by the above Russian officer.

These adapters were used by all sides in WWI. We really needed some current images, and I would like to see some more.

(OT - Which model pistol is that?)

Best regards,
Greg
Matthew E. Sutton
That is an M9 Beretta pistol.
Matthew E. Sutton
The watch is a Marathon quartz issue navigator. The map in the background is Iraq. This image was taken just before the a fallujah battle in 2004 that restored the city from the terrorist elements and returned it back to the Iraqi people.
Today, Al Anbar province is an example of the Iraq people deciding it's future and demanding peace.
Greg Crockett
Thanks for the information about the wristwatch.

It's not enough, but I want to say thank you for your service in Iraq. It's been a long war.

Through our images, there is an unbroken chain of devotion to country. Some with pocket watches strapped to their wrists, then A-11's, Benrus disposables, and now Marathon quartz navigators. These watches are small parts of our living history. Preservation is essential.

Who is this fellow? And what kind of watch is he using? 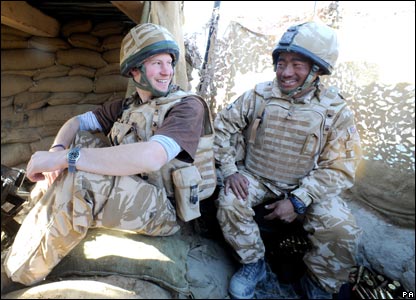 Not sure of the watch, though. On Broadarrow they think it might be a G-10 or maybe something else.... like a Pulsar...
Enzo Liguori
hi Greg,

rgds
Matthew E. Sutton
It's actually the G2000 (with date) or G10 (without date) sold by the Cabot Watch Company (CWC) of England, but are Swiss made. They are the single supplier to the Ministery of Defense (MoD), and made to their demanding specifications. It's quite an accurate and durable quartz. These are available through a store called "Silverman's". If you are in the market, beware of copy cats (i.e. MWC) Below is a link to the only reliable source of these watches besides joining the UK armed forces.

I have sold my Marathon navigator and GSAR diver that was US issue, and replaced it with the CWC "new version" 12 hour dated Quartz chronograph, the CWC G2000, and the CWC Royal Marine SBS diver (300 meter). BTW, The SBS drops about one second per week....which is less then one minute per year. These guys are not cheap, but in my opinion much better then U.S. and Canadian issue .
Sheila Gilbert
I think I got this picture from somone here a while back, when I purchased my WWI Pocket Watch Wrist Watch Holder. I will also post a photo of one like the one I purchased. Sheila Gilbert
This is a photo of the holder like the one I purchased. May even be the ebay photo, but that's what you get when you don't mark it as your own!