Internet Horology Club 185
Revue Thommen
This topic can be found at:
https://ihc185.infopop.cc/eve/forums/a/tpc/f/990103944/m/2361022033
Christian E. Galdames
Revue Thommen
Can someone here please let me know if this is a legit. Revue Thommen military watch.

Jim Hester
I do not see any military markings to indicate that it is a military watch as opposed to a civilian watch of the era.
Greg Crockett
Nice WWI German shoulder board, but the watch is nothing special and does not look like it is from the WWI era.

There are some people we know who would be glad to add all sorts of Nazi markings! In general, the watch and case do not look like those issued by Germany in WWII.
Christian E. Galdames
Thanks Guys it would appear that my friend has a franken trying to pass for a WWI or WWII PW. Something of note I found is a dial for a Military Bulova that look allot like this PW Dial. John Woolsey
Chris, your Revue has 'Incabloc' shock protection for the balance upper endstone, this makes it quite a later movement than anything I've seen on any WWII era movements.

I think 'Incabloc' type protection was around in the 40's but I've never seen it on any watches or movements I have or have had here.

John
Christian E. Galdames
Thanks John. As I stated above. apparently my friend's watch is not a military one as he might wish. It does keep good time and he likes it. Too bad about not being military though.

Greg Crockett
I don't know when 'Incabloc' was introduced, but German Army issue pocket and wrist watches (the "D-H" watches) of 1939 - 1945 had shock protection of one type or another.

It would be nice to find out when Incabloc was introduced. If it is a post-1945 inovation then it might help weed out some fakes.
Christian E. Galdames
Here is an intresting article about IWC military, watches. if you scroll down it will mention Incabloc watches from about 1937. Though it is not a certain statement.

Peter Batagio
Hi Guys; Incabloc is after the war I think 47.. if you see it you know it is not a ww 2 watch.
Konrad Knirim
Hallo Christian and friends,
your Revue is very similar regarding case and face to the Eterna I show in my book (p 243 Vol I) as WWII Kriegsmarine or German Army (page 425)!
The Eterna, that I list as Kriegsmarine has no shock resistance as all Navy watches!!
The watch on page 425 meets the specs of the Wehrmacht of WWII for Gerneral Service Pocket Watches, as they have to have shock resistance like all other D.H. wrist and pocket watches have.
=> So I am very sure that this Revue watch was produced in the early 40s for the German military. Though it has no military markings as many other watches that were all the way issued. The eagle on my shown Eterna is uncommon, but it seems really to be contemporary. The Eterna shown on page 425 is without any marking.
Bureaucracy was great in German Forces but at first they tried to win a war with limited resources.
The Kriegsmarine document on the left in the picture shows an Eterna even with M 3835 as II. class, that must be the extended II. class introduced for better pocket watches in the wartime.
Btw the British Army did use many same pocket watches frrom Swiss brands as the Germans but the GSTP watches do not have shock resistance. The same is when you compare (white) ATP with (black) D.H. wrist watches. 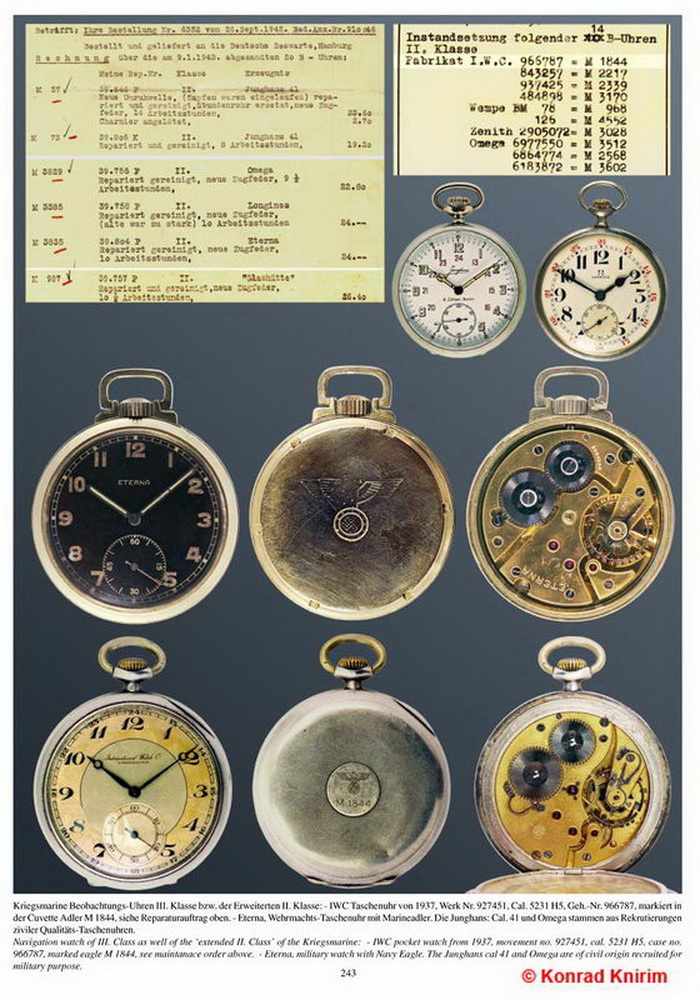 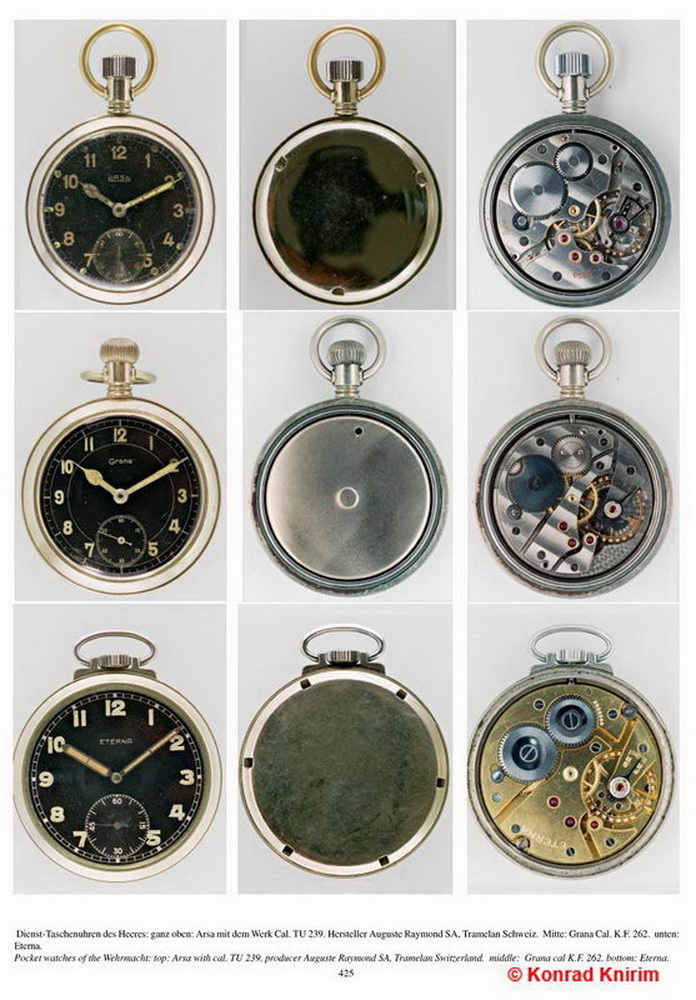 Eddie G. Hines
greetings christian, i repair aircraft clocks usually they are antique or vintage and i have been told in my numerous searchs for parts that some revue thommen movements have a juvenia origin in other words perhaps juvenia made the movement. eddie